The Workhorses of Oswestry Yard

The Cambrian system featured relatively few Panniers compared to other corners of the GWR, the exception being Oswestry.   57xx, 74xx and 54xx classes were represented over the years, but the most numerous were the 16xx class.  These little Hawksworth engines were not introduced until 1949 but were pure GWR design, specifically built for light branch work and shunting.  At Oswestry they were employed extensively shunting in the yards, as station pilots or on the branches around the Oswestry area.   Oswestry shed had 10 class members on its books at various times between 1949 and 1962.  Of these, 1602, 1603, 1604 and 1636 had long associations, 1604 spending its whole life of 11 years at Oswestry.  1604 and 1636 are two that I’d like to model in Oswestry Works. 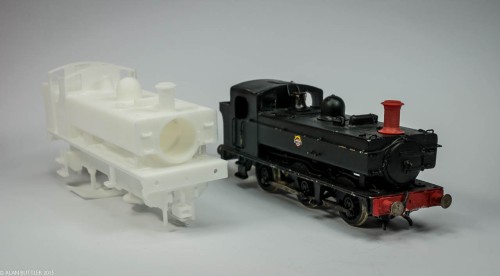 A while back I picked up a built NuCast 16xx with a view to improving the detailing and adding it to the works roster.  Other than replace it’s incorrect 57xx chimney with a 3D printed one its not had any other attention since I bought it.  In the mean time, Tom Wright has produced a very nice 3D printed 16xx, including frames available via Shapeways.   The design and build of the 3D model is chronicled here on RMWeb.  Tom has kindly modified his original design to exclude some details which I’d prefer to add myself, such as sprung buffers, etched lamp irons and the like.    I ordered it from Shapeway’s on the 17th Feb and today it arrived.

The model includes a body shell, OO gauge spaced frames with nem pockets and a separate smoke box door and roof.  It has a nice solid feel, the lines are crisp and the body shape is captured perfectly – thanks to Tom’s design skills.  The wall thickness is good, the cab sides in particular look better than some RTR offerings.   The main benefit over the B9C is being able to print the loco in one piece, whereas on the B9C due to the restrictions on the build volume at 30 microns, I’d have to print the loco in parts.  However, when it comes to the surface finish the grainy/frosted look needs attention.  The whole body is going to need sanding down, fine for the cab and tank sides but a challenge for anywhere else.  Finer details such as the boiler fittings and smoke box door will be easier to remove and replace with prints from the B9C.

The key point though is that the design itself is great and it will be another nice detailing project to get stuck into.  It’s the material that’s the problem (for me at least!) unfortunately, though I’m confident with some sanding and fine detailed parts it will really lift the model.  It will get the same treatment at 5726 – handrails, boiler fittings, buffer beam detail, pipework, scratch built pull rods and lamp irons etc and will be out shopped as 89A’s No.1604.

It will have to wait a little while though as I’m currently converting our garage into a workshop, I’ve had too many days in there with the temperature hovering just over freezing whilst I’ve been working on the printer!  With the garage/workshop finished in a few weeks time I’ll be ready to get the new 3D business going in earnest.  I’ve still been working my notice so I’ve not as yet been able to devote a lot time into getting things off the ground, but come the end of March 3D design, scanning and printing will become my day job! It’s a bit daunting/exciting/terrifying, but so far so good.  There should also be a surge in progress on the actual building of Oswestry Works in a few weeks, finally…

Being back in Wales now its been great to have Oswestry only an hour away. A couple of weeks ago I had my first experience volunteering with the Cambrian Heritage Railway, the days task being clearing out the cattle pens near the Coney Green.  About 12 of us spent the day tackling the undergrowth as well as clearing old sleepers from the mainline.  Back breaking work but great fun and a nice change to be working on the real thing!

Happy New Year! What a wet and windy start it is here in Mid Wales.  Thankfully we’ve been making the most of the good weather in the last days of 2014, spending Monday at Llangollen for a first trip on the new extension to Corwen.  It was a beautiful clear blue sky day, very cold but the mulled wine and mince pies served en-route helped!  It’s also the first time I’ve seen 5199 in steam after seeing her in the works earlier in the year, paired up with a set of crimson and cream stock.   This was the perfect day to experience the line, the sun warming the south facing hillsides and the lee sides in hard frost.

I spent New Years Eve with friends in Rhayader and our last outing of the year was to walk part of the Mid Wales line north towards the remains of the Wye bridge and Marteg Halt.  I’ve only seen the track bed from the road before so it was interesting to see what was left of the line, if anything.  The biggest surprise was what I think is remains of a concrete distant signal post, about a mile north of Rhayader.  Some cast iron kissing/crossing gates were a few yards further up the line, along with a few piles of bricks from a demolished plate layers hut in the undergrowth.  Before we turned back we took a look at the remains of the old Wye bridge, the concrete stanchions still standing tall either side the river.

Today I’ve finished the replacement pipework on 5726.  For the injector overflow pipe I’ve used slightly smaller washers, reamed out to fit the copper wire as I think they look a little more to scale than my previous effort.  For the steam heating pipework I fancied having a go at creating the effect of cloth cladding so I’ve experimented with some surgical tape.  Micropore has a fibrous texture and I think might be just about fine enough to look something like the real thing.

The handrails have also been completed, using Markits short 1.6mm knobs, not Alan Gibson as I’d originally thought.  Final job now is the whistles and shield before painting finally!