The last few days I’ve been trying to get some test prints out of the B9 Creator I bought back in September.  To say its been a challenge is an understatement, however the support and help I’ve received from the B9 community has helped me progress from tomato soup to something physical.

The B9 Creator uses a DLP projector to cure a photopolymer (light initiated) resin.  The 3D print is sliced in the desired Z axis size, in my case 30 microns, each slice is then projected into the resin through a ‘window’ in the bottom of the resin vat.  The z axis build table steps up out of the resin as each layer is cured.  Once I’ve worked out how to calibrate properly and the optimum settings have been fathomed, it should be capable of some pretty mind blowing results.

However, at this point my first prints were a complete failure – nothing curing in the resin at all, nothing floating around.  Experimenting with higher exposure settings resulted in some layers appearing, but they’d detached themselves from the build table and were floating around in the vat.

After some more hair pulling I’d realised I’d calibrated the build table wrong, then retried with the higher exposure settings and voilà! Something was created, just visible on the base of the build table under the excess resin.   There are a number of post print steps that need to be carried out, removing the print from the build table, cleaning with 70% isopropanol, putting into an ultrasonic bath and curing in a UV oven.

Once I have some decent prints to share I’ll explain a little more of the process, in the mean time here is my catalogue of errors!

Vat and sweeper in place

The build table, minus a print!

Sieving the soup, some dislodged slices

Oswestry had a number of 74xx Panniers on its books, as well as Machynlleth and Aberystwyth, so I’d been keeping an eye out for a cheap NuCast 64xx/74xx whitemetal kit on Ebay when one came up a few months back.  I’m an absolute beginner when it comes to kit building in anything other than plastic, the only contact I’ve had with whitemetal was a brief foray into Warhammer 40k when I was 18 and that didn’t involve any soldering so probably doesn’t count!  The rough plan is to use the kit to get some experience and build static under repair in the works.  The kit came without a motor or gear box, but has wheels and axles at least and spacers for OO gauge.

74xx’s were used in various tasks on the Cambrian such as station pilots and yard shunters, though rarely on passenger services outside of Barmouth being non-auto fitted.  Prototype wise, there were 5 or so 74xx’s that spent most of their BR lives on the Cambrian. 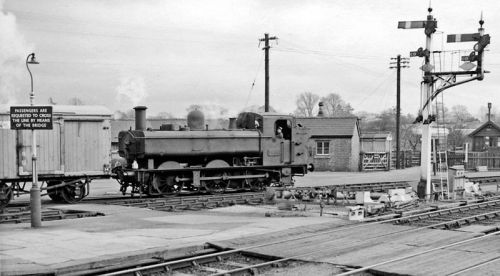 A notable addition is 7428 which spent it last couple of years as station pilot at Aberystwyth (coming from Croes Newydd in 1960), still with GWR letting adorned on the tanks in yellow chalk.  This tradition was kept up even after she was withdrawn at Oswestry and left on the cripple sidings pending its last journey to the cutters. (A great colour picture here on Rail Online)

All 5 were frequent visitors to the works:

7410 seems like a good choice seeing as it spent so much times visiting the works.

Onto the build.  Being a first timer, I’d started the build using 2 part epoxy, for the cab and splashers.  This seemed to go ok-ish, but minimising the amount of excess epoxy was tricky.  That was about 2 months ago… in the mean time I’ve bought a soldering iron and got on with the rest of the body.  I had to modify the tank/boiler assembly considerably to get it to sit flush on the cab and frames and its still not as good as it should be.  It’s been a good learning experience though, using a soldering iron for the first time and learning as I go.  I’ve been using Iain Rice’s Whitemetal Loco Construction and George Dent’s Kit Building for Railway Modellers Vol 2 books, both which I would be lost without. 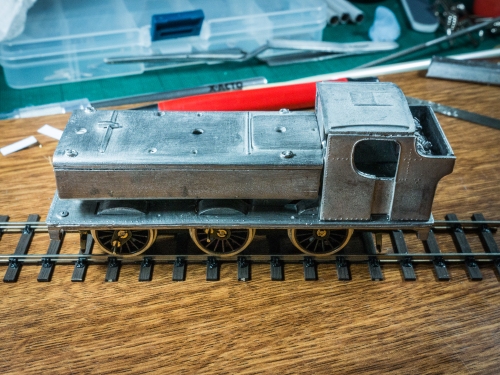 Dry fit of the boiler/tank assembly. Some work needed to minimise those gaping holes!

There is another issue with the running plate being slightly out of alignment, so looking straight on the whole loco is slightly lopsided.  As it happens 7410 was in the works in 1954 for bent front and rear buffer beams amongst other things, so I could just about get away with the poor quality of my construction 🙂 It’s rapidly becoming more of a test bed than a model that will actually be usable but I’m learning a lot so not all bad.

There are a few missing items in the kit, no top feed for starters, that I’ll 3D print, but there should also be a cover under the smokebox, in front of the tank supports.  Using some scrap brass etch I fashioned a cover with the piecing saw, I think it works, but not under any close inspection!

So far, so… ok.  Learnt a lot and feel a bit more confident with a soldering iron, especially after trying brass to whitemetal.  There needs to be a little more time cleaning up the body before I can get stuck into the list of detailing tasks.  More to come shortly. 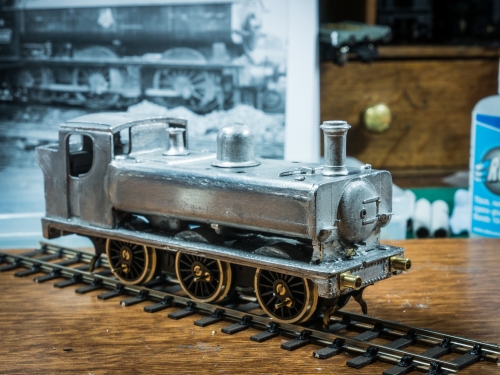