I’m fresh back from attending Missenden Abbey’s Autumn weekend with a few test 3D prints.  8 of us took up the 3D Printing course which was running for the first time, involving an introduction to Sketchup and then as much 3D printing as you could fit in!   The course was self paced so worked will with the variation in knowledge of Sketchup, with people being able to help each other out as they progressed through the course material.  Having 3 printers between 8 of us also ensured there wasn’t too much waiting around for your turn on the printer.  It was a great weekend, with so much else going on in the other rooms as well.  I was able to drag myself away from the 3D printer for a half hour or so to see Kevin Wilson demonstrating soldering and having a bit of hands on myself.  I’d highly recommend the weekend, not only was the modelling good, its a nice place to spend a weekend with good food and good company – being able to put some names to faces and chat to some of the best in the field was great.

My aims were to improve my abilities with working with some of the solid tools in Sketchup and creating complex shapes such as fillets and bevels, along with getting an understanding of how 3D designs need to be engineered with 3D Printing in mind.  Such as taking into considering overhangs, bridges etc, by either using support material or printing in multiple components.  Here’s some examples of what was produced:

I’m interested recreating some of the subtle variations between the many Dukedog’s seen on the Cambrian (as superbly researched here on the GWR Modelling site).  These 2 items were good first steps to try out with the printer – above footplate sandboxes (as per 9000 and 9005), tall top feed (9021, 9004, 9000 and many others).

The sandboxes were straight forward enough, taking the sandbox and wheel arch/splasher measurements from J.H. Russell’s Pictorial Record of Great Western Engines.  The top feed was a tougher to get right and I’m still not 100% happy with it, but it was a good test of skills using the follow me tool in sketchup.  I’d not been able to find any drawings of it before hand so it was a best guess from photos and drawings of other top feeds.

This is part of the Erecting Shop crane that I have on my list of things to do for the works.  It’s a little early days to be thinking about detailing the works interior but this was a good chance to see what the printer could do.  I’ll need to revisit the 3D Design later to get it right, but this wasn’t a bad first pass.  I’ve roughly modelled the crane within the erecting shop to get an idea of scale as I’ve no drawings to work from, just photos from the surviving crane at MOSI.

Lastly, by far the hardest task was attempting a chimney.  I’ve been looking for a BR-era Manor chimney for about a year, the DMR model seeming to be the best production but they are very hard to find.  Next best option has to be printing my own!  Find drawings however has been a challenge, I had a quick look at the NRM but didn’t have enough time for a thorough search.  This drawing is based on the GWR Chimney (loosely!), but it was more of an exercise in learning how to make the complex curves and shapes as the chimney meets the smokebox.  After getting a headache from trying to get this to work natively with sketchups toolsets, I had to use a plugin after reading this post on RMWeb.

Finally, here are all the bits printed out!  They were made using a MakerBot Replicator 2.0 at 200mn resolution.  They certainly have given me an idea of what is possible and more importantly got me thinking about how things need to be made in order for them to be printable.  I’d already taken the plunge and bought a 3D printer before doing this course.   After reading up and also seeing Rab’s achievements with his printer, I bought a B9 Creator 1.2.  The 1.2 B9 is capable of 30mn resolution so my first job will be reprinting these pieces as a comparison.   I’ve bought the kit version of the printer and haven’t started the build as yet, I’ve another course on Monday evening at the B9 distributors in London, I think it best to go there first to see one in action before making a start. 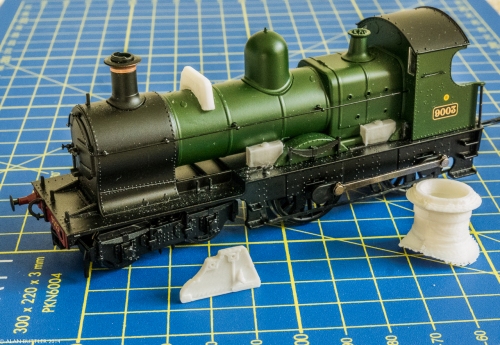