A number of the Dukedog’s had above footplate sandboxes as determined by the frames of the donating Bulldog.  No.9000 and No.9005 will feature in the Works, both of which had this particular trait.  There is also another slight variation, No.9000 and No.9005 had their pull rods above the filler lids, whereas 9008 had them running along side the sandboxes, in between the wheel splashers and springs (it’s quite hard to make out, but here is a picture courtesy of the GWSR)

This evenings task was seeing how the 3D printed sandboxes for 9000 and 9005 would fit.  I’ve had to tweak them a few times to deal with the slight lip on running plate near the rear wheel splashers.  First job though was to remove the front sandbox lids from the running plate.  These are part of the metal chassis and were not going to budge with a knife, so I threaded a piecing saw blade between the boiler and the running plate in order to cut them away. 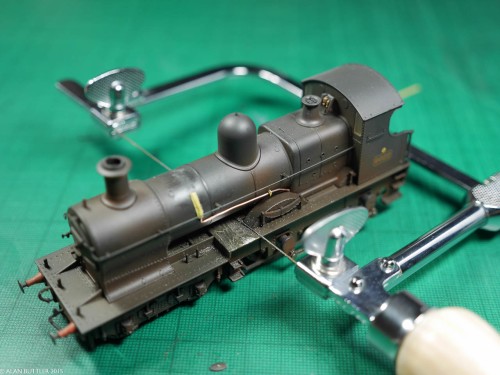 First complication was that the front grab rails needed removing in order to get a decent cut.  These are also metal and quite hard to remove cleanly, in fact I only successfully pulled one, with the other three snapping off and leaving the peg in the chassis.  After taking off the sandbox lids I redrilled these ready for fitting replacements.

The sandboxes ping off their build supports really easily, but they do need a little cleaning up with a knife or needle file to ensure a flush fit.  The build support penetration can be configured, in this case it was set to 25 microns, so if you remove the supports carefully they just need a quick once over with a file.

I’ve experimented with what angle to build them at quite a bit, the best detail being printing them in the normal orientation, but this does mean the base of them is rather uneven – this is due to the resin dripping away and some of it curing.  I’m sure that can be resolved, once I replace the layer of silicone in the printer I should get even sharper prints.  But for the time being I’ve rotated the prints 45 degrees which gives best of both worlds. 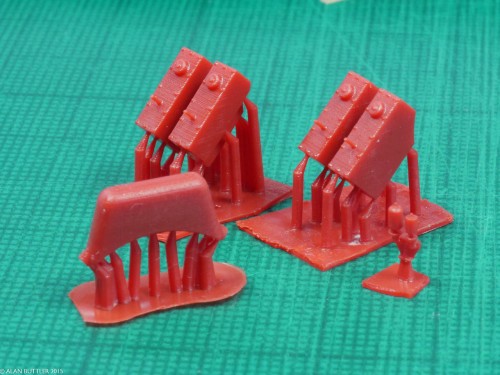 On the top of the sandboxes I’d added the short spigots for the pull rods to connect to, more as a test if anything to see if the printer would cope with them. It did, but in practice they are useless, there is nothing for the pull rod to attach to and its too fine a point for glue.  These were clipped off and 0.4mm handrail wire used instead, allowing the brass strip pull rods to be soldered to the handrail wire. 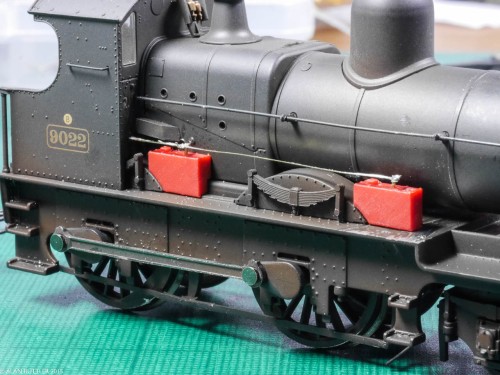 With that done the next jobs were to bring No.9000 up to the same basic detailed level of No.9018 – replace all the buffer beam fittings, add the ATC electrical conduit etc.  The top feed also needed fixing and the pipework modifying, all tasks which involve a fair bit of handling and not ideal after just fixing the sandbox pull rods!  Next time round I’ll put them on last as the pull rod connection to the spigots is quite delicate.

Tonight’s detailing has been some tentative steps with a revisited top feed design for the Bachmann Dukedog.  It’s still not 100% right but I’ve made a start anyway, by fitting the pipework temporarily I can get some idea of anything else that needs adjusting.

No.9000 has a couple of detailing tasks, the top feed and the next post will be on the sandboxes.  For the top feed I started out with some 24 swg (0.559mm) copper wire, taped to the boiler with some Tamiya masking tape to get the right shape.

With the wire tacked in place it can then bent to shape, with a pair of 16 BA washers added to represent the pipe join before it dips behind the wheel splasher.  I’ve cut the tape here in about a 3mm wide strip, thinking that this could be a good way of simulating the thin metal sheet that covered the pipework from the top feed to just before the bend in the pipe.

With the top feed temporarily fitted with Tacky Wax it can then all be jiggled around until it looks somewhere near right.  I had to make 2 slight cuts in the Tamiya tape to get it to bend around the shape of the boiler, as well as the wire.  I’m not sure its worked too well, though once I come to fit it permanently some super glue will help it mould to the shape of the boiler and the wire.  I think bend in the pipework where it runs back towards the cab needs to be lower as well.

That’s it for the first entry on 9000, the next post will be fitting the top feed permanently and fitting the sandboxes and pull rods. 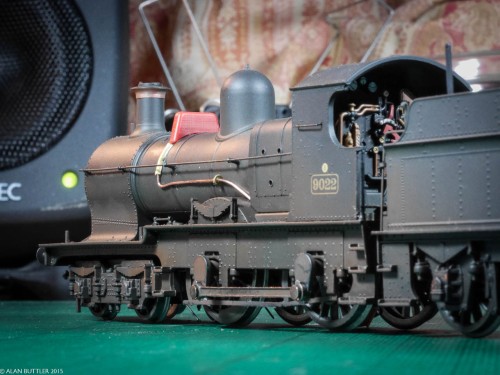 Pushing the envelope with a B9 resin mix 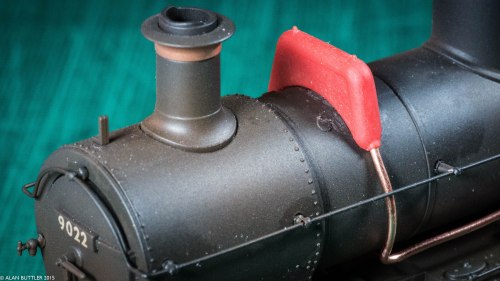 After what was in retrospect disappointing results with Spot HT – through my own ineptitude I must add, I went back to the tried and tested  1:1 mix of B9 Creator Red and Cherry resin.  This isn’t to say one is any better than the other, but with little life left in the layer of PDMS silicone before it needs replacement I didn’t have the leeway to experiment further with Spot HT.

This last batch of prints has been more experimentation with what level of detail is possible.  Second time round I reduced the size of the whistles and the steam heating cock to be a more prototypical size, even more challenging for the printer.  After quite a few false starts (left the projector lens cap on, build table not calibrated properly, not enough resin, ultrasonic died), I finally got a successful batch of prints of the highest detail so far.

This feels like uncharted territory because I’ve not wanted to let myself believe that it was capable of this kind of detail, until I’d seen it with my own eyes, coming out of my own printer.  I firstly revisited the design of the top feed for the Dukedog, the previous version not having a recess for the pipework.  This was designed to fit 20 swg copper wire, but the printed hole is slightly tight. It was a good exercise to see how well the resin could be worked with and the small hole could be opened up easily twiddling with a small drill bit.  This top feed will end up on 9014.

The whistles came out almost perfectly, considering that some of the detail in the design was under 0.25mm it would be impossible to see with out a macro lens or magnification.  Once cured these fine parts are quite robust, they aren’t indestructible but they did handle tweezers and finger tips, positioning them and trimming away traces of Tacky Wax under a magnifying glass!  It’s the detail presented on these that has really left me speechless.

The beauty of this resin is it’s use to complement traditional materials, in this case matching up the whistles and mount with a Comet whistle shield etch and two strands of 36 swg copper wire to represent the whistle pipework.  The whistle print stood up to the finicky task of glueing everything together well, with impatient tweezer nibs looming, third hands full, trying not to drown the details out in glue.  This is the kind of detail I was hoping to attain after a few abortive attempts last year.

So with that done I think I’m out of excuses as to why 5726 can’t be finally painted and have its correct numbers fitted! 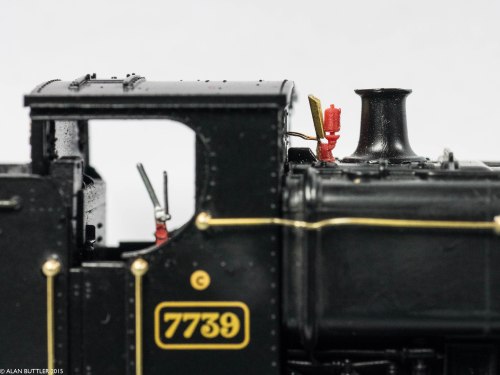 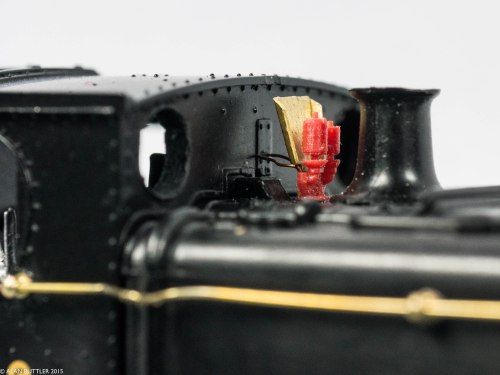 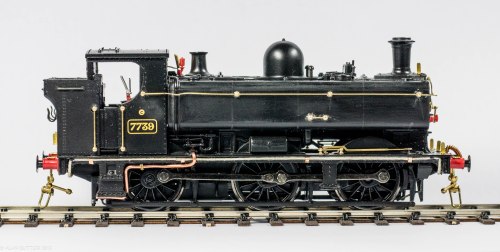 Other B9 Creator users have had some impressive results usingSpot-HT resin, in particular for small highly detailed components.  The main difference with this resin to the proprietary B9 resins is that you cannot use it for casting, it is also much less viscous which should mean that it settles quicker.

I’d just about enough life left in the layer of PDMS for another print, so today I tested printing some detailing components using Spot-HT.   The test parts I’ve roughly drawn up in Sketchup, some will need a little more work depending on the results of the print.  The test pieces were:

First up, the steps have come out really well, with a thickness of 0.5mm they look just right.  The rivet detail has come out nicely but I will probably increase the size next time round.  There is some flash to remove from the edges of the steps, due to the positioning on the build table.  Another thing for next time is printing these small components on a sprue. They were a devil to get off the build table without damaging! That said, this material is pretty tough even before curing under UV light.

The whistles have lost quite a lot of their detail but I think this is down to the clouding of the PDMS.  However, the small nut on top of the whistles has printed really well, considering its 0.25mm wide its pretty amazing!   The steam heating hose cocks also look pretty good, with the addition of a turned brass pipe and handle made from 0.4mm handrail wire.  However both these items are slightly overscale, I’ll have to get the micrometer out next time and make them more accurate!

For now that’s it for printing.  I’m waiting on my spare vat to return from the USA as its being fitted with a replacement for PDMS called Nuvat, developed by Evert on the B9 Creator forum (details here).  This new material should last a lot longer than PDMS.