Injectors part II and a visit to Oswestry

In the last entry I was trying and failing to get an injector built with the soldering iron.  I had some good advice about using 188 deg solder combined with 145 deg to build up the injector without it melting into a lump, I’ll give that a go when I’m back home in Brighton.  In the mean time I’ve retried the process using super glue.  It’s been pretty successful, except I’ve not been able to make it small enough – without the pannier body to give it some sense of scale, it looks ok but it still needs to be about 20% smaller to fit between the running plate and the tanks! 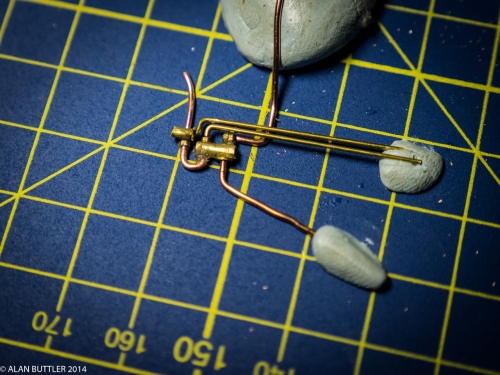 For the time being I’ll put this little side project to one side, there is still much to do in Illustrator to get the works ready for the laser cutter.  Once the 3D printer is up and running it will be a good test of its abilities.

Whilst back home in Wales, Oswestry is only an hour or so away so I usually get up there to have a look around for new ideas.  The gates to the inner yard are usually closed, but by chance they were open on yesterdays visit.   This yard was situated between the machine shop (which was linked to the loco works) and the smithy. In the yard to the southside were the coppersmiths, brass foundry, engine house and the boiler house.

The yard itself had a number of wagon turn tables though by the 1950’s it looks as though only one was left in use to access a short spur off of the works thru road.  This spur was used for the loading of refuse, ash and such into wagons for disposal.  On the north side of the yard were the stores and departmental offices.

Seeing the low afternoon sun shining on the buildings got me thinking… it would be quite something to make the works a modular layout, in the same vein as Mikkel’s Farthing layouts, building the works up with 3 cut-a-away diorama’s.  This would include a 4th module to represent the works sidings and up/down main lines to the north of the works.  To get an idea of the scope, I’ve put them together in Sketchup and colour coded the proposed modules:

These views show the whole works, but I still think a cut away has the most potential, extending the cut from the existing diorama, exposing the inside of the machine shop, the inner yard, the wagon shop and the carriage shops.  Quite a challenge but building it up in manageable sections like this should make it more achievable.

Surprising what an afternoon wandering around in the sun can lead to!